Soundtrack of our lives 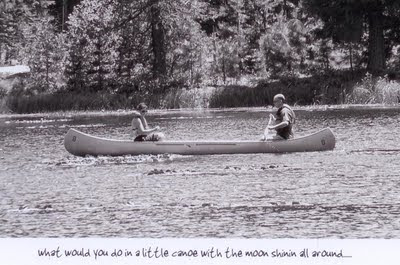 Music has the amazing capacity to express our emotions and can trigger them as well. I have written before on how certain music may evoke specific memories; where were you when you heard it? The following may be a bit narcissistic, but I did it anyway. I made a CD of the songs that define some of the moments on our recent journey. I then played it on our stereo and was transformed into a blubbering mass of nostalgia. As Barbie said, it took her to places she has not been in a while and wasn't really ready to return.
If these songs are familiar to you, just hum them in the background as I catalogue their relevance:

***WARNING*** Listening to music in the car can be dangerous to your emotional stability
Add a playlist to your page using iLike
1: 100 years by Five for Fighting
It is March 2004. I had just told my boss, Dr Weiss, that I was leaving Yale to return to California. While driving to Hartford, I experienced something I had never really felt before; doubt. I knew we needed to move, but I really did not know why. This song came on the radio to punctuate this mid-life crisis.

2: Adagio for Strings by Samuel Barber
I was at our annual church girl's camp. Two days prior I learned that I had a serious heart condition that gave me a prognosis of 5-10 years. The word amyloidosis had yet to be mentioned. All year I had planned on going on the back-packing trip with Barbie and Caitlin, but I wasn't strong enough. I remained in camp after they left for the 2 day back-country trip. I figured that at least I could go canoeing. However, to take out a canoe, the camp rule required that I pass a BSA swim test. I couldn't do it. I pleaded with them to let me go out in the canoe; but a rule is a rule. I walked away a broken man. All of my favorite activities were slipping away one by one. A few days later, the waterfront director had mercy on me and said that I could go in the canoe if I had a partner that was a swimmer. Barbie has an aversion to cold water, but bravely took the swim-test so that she could accompany me. It was a beautiful moment in an otherwise painful week. My sister-in-law Rachelle, while walking along the shore, saw us and took a picture. It hangs here in my office and reminds me of that moment as the swelling of the strings reach their climax in this adagio.

3: You Are Loved (Don't Give Up) by Josh Groban
Four days later I finally agreed to let Barbie tell others what was happening to me. I had no idea how alone she felt having to handle this by herself. She sent an email to family and close friends. The response was immediate and overwhelming. The resultant communication of love, concern, prayers and friendship sustained us through are most difficult moments, and continues to do so today.

4: Viva la Vida by Coldplay
As we drive home from Santa Clara for the first time, this is the song and album we listen to. The heart biopsy was just done and I was told by Dr Weisshaar that my heart only pumps at half capacity. When I ask her if I need a heart transplant she responds, "Only if you are healthy enough."

5: Better Days by The Goo Goo Dolls and
6: Make This Go on Forever by Snow Patrol
It is August 12, 2008, a Tuesday. After a month and a half of never leaving my side, Barbie departs for San Diego to celebrate Samuel and Michelle's wedding. I sit alone in my hospital room with a constant infusion of Dopamine to keep my heart going while I wait for a new heart. As I listen to random songs from Pandora.com, these two songs play one after the other. I immediately write a blog of how much I miss Barbie and she writes her response. The feeling of loneliness is then augmented to surreal proportions when 3 hours later I am offered a heart at the Mayo Clinic. I know that if I accept, I will be there alone. At this moment I give up complete control of my life to others and rely solely on prayer.


7: Waiting by Caitlin Anderson
Fast forward one week. The heart at the Mayo Clinic is turned down. Two days later I am at Stanford receiving a new heart. August 20, the day after my 49th birthday, Caitlin and Rebecca come to visit me and Caitlin sings this song, accompanying herself on guitar. She wrote it for my birthday, thinking that I would still be waiting for a heart. Now I am only waiting to go home.

8: The Riddle by Five for Fighting
No one memory in particular; this one shuffles up on my I-Pod on our many drives to the Bay Area and I like the message.

9: Hide and Seek by Imogen Heap
While driving Caitlin to piano lessons I get the call that I am in heart rejection for the 3rd time in one month. I fear that this will prevent us from traveling to Utah to see Coldplay and have Thanksgiving with our kids.

10: Death and All his Friends by Coldplay
I am sitting in the car at Lincoln High School waiting for Caitlin. As I listen to Death and All His Friends I think of the bone marrow transplant that will begin the following week. I know the risks, and I accept them, but I still feel an anxiety about what might happen.

11: The Moment I Said It by Imogen Heap
The song hit me as I crashed physically last June. I thought it was my untreated amyloidosis, but turned out to be a very bad cytomegalovirus (CMV) infection from which I recovered.

12: Home by Marc Broussard
I heard this on Barbie's I-Pod on one trip home from a doctor appointment. I loved it. Turn it up loud and enjoy. It reminds me of all of the good times which greatly out-number the tough ones.

13: True Companion by Marc Cohn
This is dedicated to Barbie, my true companion; enough said. You'll have to listen on your own.


Kevin
Posted by kevinandbarbie at 5:22 PM

I like this idea. I think I will steal it. Someday, maybe my loved ones will like knowing the songs that make me feel something. Thanks for the inspiration.

I had my daily cry over your beautiful posting, Kevin. In part because of empathy for what you express so well, but also because it hits home.
Ed has not regained the mental and physical strength of before his SCT a year ago, and is now on a new downward spiral.
But when a door closes, a window opens - from full-time work to new pursuits.
love, Aunt Renie

KEVIN AND BARBIE! You are simply amazing. It has been fun to see your faces, read of your incredible challenges and miracles. WOW The kids have sure grown up! Can't believe the twins are married now! And the girls have blossomed into gorgeous young ladies. May God continue to bless you. We are grateful for our short stay in Connecticut where we were able to be influenced by you. May God bless you!

KEVIN AND BARBIE! You are simply amazing. It has been fun to see your faces, read of your incredible challenges and miracles. WOW The kids have sure grown up! Can't believe the twins are married now! And the girls have blossomed into gorgeous young ladies. May God continue to bless you. We are grateful for our short stay in Connecticut where we were able to be influenced by you. May God bless you!