The Sky's The Limit

About four months ago I met an amazing 92 year man. Since my days as Chief of Urology at the VA Hospital in Connecticut I always ask the same question to men of a certain age. "What did you do in the war?" Which war is always understood based on their age. He replied, "I flew B-17 bombers in the Battle of the Bulge." I excitedly told him that I was learning to fly to which he responded, "Are you a natural?" I said that I didn't know. Today I soloed for the first time. It was incredible and exhilarating. Learning to fly has also been the hardest thing that I have done this side of forty. I was not a natural. Learning to consistently land well took many hours of practice. The intellectual study, physical control and mental focus was immense. It's hard to learn to do something very difficult in your fifties. So often we're just coasting at this point. Yes, I can do difficult surgeries, but I developed those skills in my twenties and thirties. We can still learn new and difficult skills later in life, but you must pay the price and not give in to the momentary disappointments and self doubt. Today I celebrate the opportunity to fly and learn and see the world from a completely new point of view. We are only truly old when we stop learning.
I've always wanted to fly but never really considered it an option given all of the other responsibilities that took priority for my time. Then two years ago Barbie gave me a gift of an introductory flying lesson. I was immediately hooked. However, at that time, patients with heart transplants could not get a regular pilot's license. That has now changed but certain chemotherapy drugs also limit ones access to such a goal. Then for Valentine's day I got Barbie an introductory flight lesson. It was so fun to see her pre-flight the Cessna 172 and the take off with the instructor. Soon, to her delight, she was in control of the plane; banking and turning, as we flew over our house. This reignited my desire to fly. It turns out that to fly a light-sport plane a medical exam is not needed. All that is required is a valid driver's license.
I began my training in June with California Sport Aviation in Lodi, California, which is a 55 mile drive from Lincoln. My flight instructor is Bill Bardin. We spent many, many hours flying over the Sacramento valley, learning maneuvers and landing. He is a good instructor, but he wants perfection as he feels responsible for the ultimate safety of the pilot and the plane. Many times he would pull back on the throttle and say, "Your engine just quit, what are you going to do now?" And I would scan the earth for a suitable landing area and execute a low approach, (as if I were going to land). I often felt like a medical student again being grilled by the professor. I don't know if any pilot ever gets their instructor's voice out of their head. In a way, I hope not.
It seems that all of the really difficult things in life that we learn require a good (and patient) mentor. I was fortunate to find Bill. I was also very lucky in that we never cancelled a lesson for weather or equipment issues. I now feel confident to continue learning on my own. I spent a year during my fellowship with Dr Clayman learning how to do a laparoscopic nephrectomy. But it was only when, at Yale a year later, that I did my first case as the attending that I really felt like the surgeon. This is how I feel today.


You can do anything that you really put your mind to. The sky's the limit.
Posted by kevinandbarbie at 5:12 PM 2 comments: 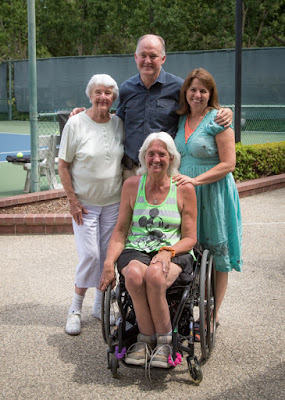 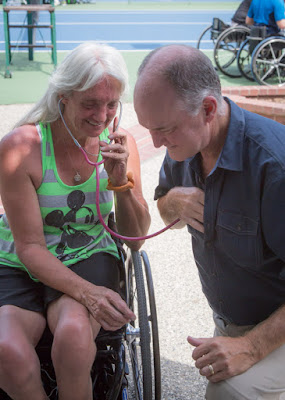 The first night after my heart transplant I had trouble sleeping. As I lay awake in the dark my mind drifted to the person whose gift had just changed my life forever. I began to compose a letter to his family in which I expressed my desire to meet them in person so as to give them a hug and bring his heart close to them one more time.
It has now been almost seven years and the dream finally came true yesterday. My donor, Shane's, Aunt Patty and his grandmother Gertrude were in town for a tennis tournament. Patty, who is paraplegic, competes internationally and was in Roseville for the weekend. On Thursday we opened the mail to find a card from her hoping to meet us. Shane's cousin had recently received a kidney/pancreas transplant which stirred in Patty a desire to find out about me. I couldn't be more thrilled to meet her and her mother, Gertrude, who just celebrated her 90th birthday.
Barbie and I arrived at the Johnson Ranch Tennis Club about a half mile from where I work every day. My emotions were raw and spontaneous as I knelt to give her a hug. They told us all about Shane; about who he was and his personal decision, conveyed years earlier to his father, to be an organ donor. I felt a new closeness to him and to our shared heart. The connection was complete.
Words can never convey the gratitude that I feel to him and to his family. When my time here on earth is done, (a very long time from now,) I will find him in heaven and finally know the man that made my continued mortal existence possible. For now, meeting his family fulfills a wish and a dream that has lingered so long.