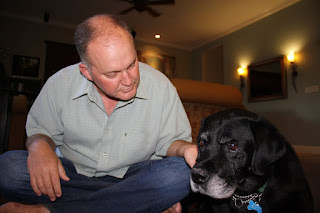 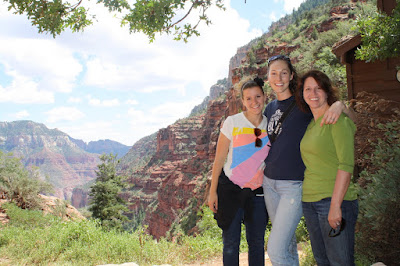 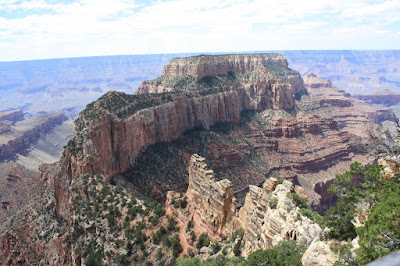 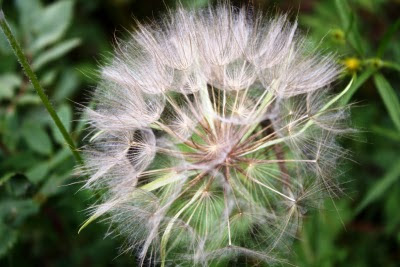 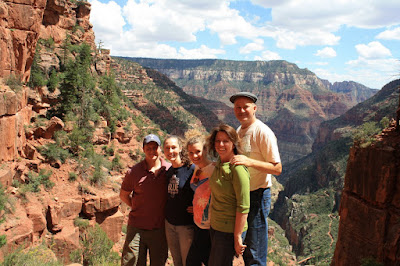 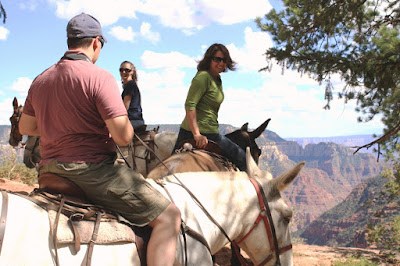 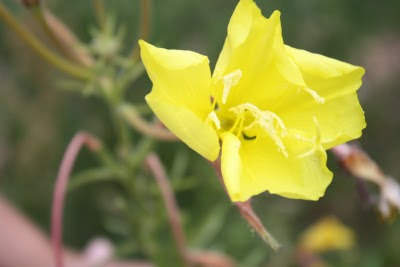 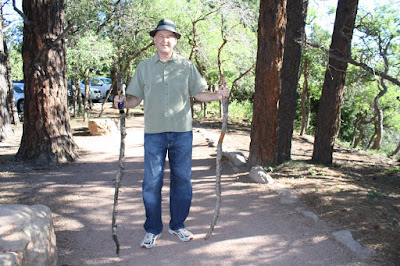 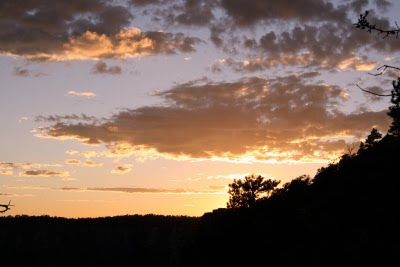 Today is a wonderful culmination of both the last week and the last two years. We home returned last evening having done the 2000 mile circuit through the West. Last Sunday, we left for the Grand Canyon North Rim at which we spent three days. Our cabin was situated such that either window (on the left or right) had a view of the canyon. This was not an occasion to find the beauty in every day; rather every 15 minutes as the light, clouds and breeze changed, a whole new scene of consummate sereneness would fill the senses. We snapped 100s of photos knowing that not a single one could come close to the majesty of a single gaze present on the rim of such a creation.
Samuel and Michelle joined Caitlin, Barbie and me as we explored on foot, by car and on mules. I know my limitations and I knew climbing back to the rim after descending 1800 vertical feet into the canyon would be better accomplished on the back of a mule. However, my mule, Fred, had a penchant for walking to the edge of the trail with his head hanging over the cliff and his hooves 4 inches away from oblivion. I was left to trust his experience and sure-footedness.
Barbie had a mission to photograph all of the varied wildflowers she could find. As I waited under a grove of quaking aspens, the only sound was the rustling of the winds through the leaves. The canopy flickered like silver-green coins falling from the sky (Michelle's metaphor) and I thought, "There must be at least 10 words to describe this experience." Unfortunately, the language containing such descriptors does not yet exist. I would need a single word that both invokes the simultaneous perception of four senses while capturing the rapture exerted upon the soul by its witness. In English peacefulness is a good word.
Thursday we travelled north to see Jeremy and Alexandria who now live near Salt Lake City and on Saturday attended the wedding of my niece, Michelle.
All of the above mentioned experiences would not have been possible were it not for the tragic loss and subsequent sacrifice of Shane and his family. My thoughts are with him, his parents and sister. I am humbled to know that this difficult experience for them has allowed me to experience so much. It was two years ago today that his shared heart became part of me; allowing my eyes to see, my hands to serve and my memory to rejoice in such a gift of life. I again would appeal to that same yet to be discovered language to convey my overwhelming sense of gratitude to those that have saved my life through faith and science, but, alas, it may only be that those who see the light of hope in my eyes will sense what cannot be uttered.
Two years ago, as I lay in the hospital recovering, I thought of all of the places I have been in my life. "I have travelled the world," I thought, "But I have never been to the Grand Canyon, a great symbol of America's beauty." I made it my goal to visit as soon as I could. At my 2nd annual heart biopsy, the nurse practitioner said that I shouldn't travel above 3000 feet without acclimating. Here I was, hiking up a hill at 9000 feet with Caitlin at my side. As we approached the top of a particularly steep incline I commented, "I can't believe I did this." Fours seconds and 13 rapids breaths later I continued, "I can't believe I did this well!" 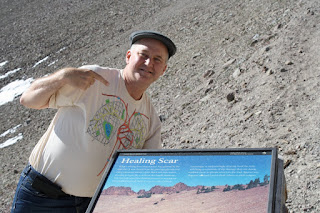 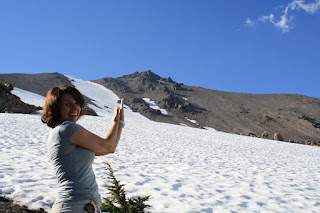 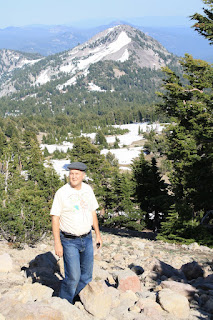 How time flies when you are having fun. Two weeks ago I was driving home from the lab and called Barbie to see if she wanted to take off to drive to Mount Lassen. This is a national park with a dormant volcano at its center. We had not been there in years and we took off for the three hour drive north. It was one of those gorgeous days with perfect whether. We drove to 8000 feet, which is the base of the trail to the peak which is over 10,000 feet. Barbie wanted to go for a hike. I figured I might make it to the corner of the 1st switch-back. I huffed and puffed and finally reached it. She wanted to try one more. Needless to say, with each new turn, I felt renewed energy and soon we were half way to the peak. It was a glorious feeling to gaze over the horizon at 9000 feet. I surprised myself to discover that I could still hike a mountain, especially at that altitude. I had to at least have a health score of 96 to get that high.
That weekend I also learned that two people I know with amyloidosis received transplants. Kathy got a new liver (she has familial amyloidosis) and Vince got a new heart. His presentation was identical to mine and I knew without a heart he probably wouldn't survive for very long. Both are now home and doing well. Of all the amyloidosis patients that need heart transplants, only 10% ultimately get one. I am so excited for them both.
Caitlin finally returned home from Europe on Tuesday. She had a wonderful time, but Barbie and I realized we are not ready to be empty-nesters.
I have never been to the Grand Canyon; this is on my bucket-list. Sunday we will leave to spend three days on the North Rim at the Grand Canyon lodge and take a mule ride down into the canyon.
I went to my 2nd annual transplant appointment and my biopsy showed 1R/1A which is mild rejection. Otherwise everything looks great. I also followed up at Stanford with Dr Schrier and Dr Arai. It is clear that my response to Revlimid is dose dependent so we will try alternating 10 and 5 mg every other day and check an Allomap blood test in 3 weeks to see if it causes worsening heart rejection. With amyloidosis, there is no one right answer for every patient. One must be flexible and take calculated risks.