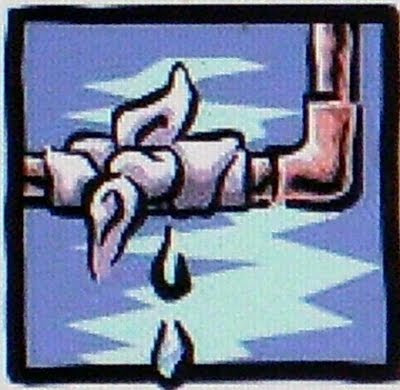 A few years back, while living in Connecticut, I was given a new calling in my church after being released as a bishop. This involved serving on a regional council in our Stake. During one evening, the clerk had the assignment of determining the vocation of each member attending the meeting. When he got to me I simple stated, with all of the dryness that I could evaporate from my voice, "I am a plumber." He flatly accepted my decree and moved on to the next person. This is actually not that far from the truth. I fix pipes, albeit human pipes. (It is interesting that much of human disease is a result of clogged or leaky pipes.) For years when people ask what a urologist does, I often answer, "I fix old men who can't pee and old women who can't stop." However, in addition to alleviating issues with the yellow stuff, I also work at increasing the pressure of the red stuff. As has often been reported in our specialty, 'A hard man is good to find.'
Of course, my work in erectile dysfunction goes back to my days at Yale where I not only treated hundreds of men, but was instrumental in developing both the lectures to the second year class on impotence, but also the core curriculum course of Human Sexuality to the fourth year class. My approach, the pragmatist that I am, generally focused on normal heterosexual male issues longitudinally. I focused on changes over time.
I took a very different approach yesterday as I gave a lecture to the heart transplant support group at the Santa Clara Kaiser. The title, "Intimacy after Heart Transplant" I felt this was apropos as a heart transplant both improves things through the increased flow of blood/min.; it also has inherent complicating factors. I felt that by naming these often avoided issues, the couples present might begin difficult dialogues. This particular lecture, however, was unique for me in that while speaking, I never lost cognition of the fact that I was also a member of the audience.
There are many things in life that we avoid speaking of because they a hard and require risk. Sometimes, though, it is essential to begin the discussion if we are ever to fix the problem. I hope I helped someone onto that path. The proof is in the pipeline.

Kevin
Posted by kevinandbarbie at 1:20 AM

Kaiser Franklin in Denver covers this issue in the introductory film at the Infusion Center. I agree, it is healthiest to discuss relevant issues that may be difficult. We soon realize that common phenomenon takes the issue beyond the personal.
Thank you for continuing to share information.
love, Aunt Renie

Kevin & Barbie, Thought I would send you an update on Rich's condition. He got out of ICU and is now on ortho floor and is doing amazingly well. He has been doing a lot of walking, even a few stairs. Everyone is very happy with his progress. I'm sure his recovery from this will take awhile especially given his peripheral neuropathy. Dr. Comenzo said not to take his chemo/steroids regimen until he has recovered, which is what was expected. This is Rich's 2nd encounter with a moose. About a year after his stem cell transplant he surprised a moose in about the same area as his latest encounter. The moose partially stepped on his leg that time. The leg was not broken but crushed tissue. He still has a scar that looks like half a hoof. I think Comenzo thinks we are a little crazy up here in Alaska! Things are looking up. Hope all is well with you. Elle

I send my greatest respect and appreciation to plumbers everywhere......