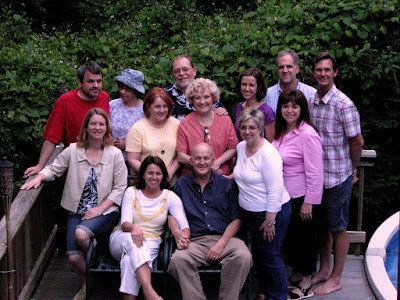 Occasionally I find myself without the proper language to reflect an experience. Mostly because the reaction that occurs lies deeper than words than might be floating in my shallow vernacular. We just returned from four days in Connecticut. The putative reason for the trip was to celebrate the recognition by the Yale Surgical Society of my former chief, Dr Robert Weiss, for his years of service to Yale University. Additionally, the previous chief of urology, and my partner during my time there, Dr Bernie Lytton, was celebrated in a festschrift the following day. (I had to look up that one) A festschrift is the celebration of an academic career through the writings of one's colleagues. I also was asked to speak. Saturday and Sunday was spent with dear friends from church.

The image of two rooms comes to mind as I contemplate the impact of these reunions upon me. The first room was Fitkin Auditorium in Yale University where I sat every Monday morning for eleven years fro Urology Grand Rounds. In addition to my esteemed colleagues with whom I served on the faculty, a significant majority of the residents that I had trained were also present to honor Dr Weiss. We rehashed are favorite embarrassing stories of our short time together. However, Dr John Phillips summarized that time so eloquently as he spoke of the 'persistence of memory' and the 'transformative' effect of those brief three years that each resident spent with us; dryly observing that he had things in his refrigerator for longer than three years. The bond created between professor and resident is forever forged in the daily combined effort to cure disease and alleviate pain. Those were days never to be forgotten. Dr. Lytton and Dr Weiss, my mentors created both an inquiring and nurturing environment which remain the richest years of my life. As the room filled to capacity, so equally did my memories of those days that we all spent together in one common pursuit; the care of patients, both today and in the future.

The second room was the chapel of the Woodbridge Ward, where our family worshiped for eleven years. I had spent thousands of hours of service in that chapel, for many years as bishop of the congregation. At work my role was to alleviate physical pain, however, at church I struggled to resolve spiritual pain. I felt so much love in that room and yesterday was no exception. Again, true and lasting friendships have their genesis in the sacrifices that we make together. It felt as if we had never left. Barbie, Caitlin and I were at home again; a different home, a different life.

Today, emotionally and physically spent, I spent the day recuperating. Tomorrow it is back to Santa Clara for my two month heart biopsy.

When the persistence of memory reflects so much joy, you realize that every room remains empty until we fill it with friendship.

Kevin
Posted by kevinandbarbie at 7:49 PM

It must've been sweet to visit dear friends and memories; it's got to feel wonderful to hear how your life and service have been a blessing to others. I'm thinking of you and your family as you now revisit Santa Clara. Lots of love to you.

We haven't been back to CT in 5+ yrs. I miss it. Seeing those people that I know and love makes me yearn to go! I hope we can do that soon. Lucky you. (:

I had a wonderful time visiting with old friends, and making some new ones in the hallowed halls of Yale. However, the highlight of the trip was seeing you and hearing of your journey. I sincerely hope we keep in closer contact, and am glad to be reminded that we do indeed live in the same state. You were always a mentor, and I utilize the skills you taught me (either directly, or by fashion-sealing) daily. Stones and lap nephrectomies are clearly my strongest skill-set in practice. More importantly, I have learned that the character of the person, more than the skill-set, makes the doctor. You, sir, have taught me both, and I am forever grateful.
Greg

It is so nice to see that you can travel and participate in the moments of life that make life precious. It was equally fulfilling for me to see friends from years ago when I lived in CT too. The bonds that tie friends together really are of an intrinsic nature! As we continue to follow your journey, our prayers are with you every step of the way! Lots of love to both of you--