Yesterday the operating room where I work suffered a four hour delay. Someone had left a bag of fruit in the break room over the weekend. A few fruit flies were seen nearby. However, when the bag was finally found and opened thousands of fruitflies escaped. (I see a metaphor here to gossip, but with a pillow and feathers; but I digress.) It was clear that it would take a few hours to clear out and sterilize the area. We were scheduled to do three radioactive seed implant cases for the treatment of prostate cancer.
Wanting to ascertain the status of our day, I hovered near the main office where a high level pow-wow was in progress. The head anesthesiologist was commenting on how cases using implants would need to be rescheduled because of their heightened need for absolute sterility. Still just outside the door, I commented to him, as an aside, that there existed no bacteria in creation  that could survive on our radioactive implants.

A moment later, finally inside the office and the conversation, the OR director looked at me and queried, "Now, Kevin, you guys are using implants, correct?" Clearly, wanting to make the distinction that we were safe I answered. "Yes, but bugs don't like radioactivity.
Without missing a beat he threw up his hands in a feigned sense of importance and exclaimed, "but what about Spiderman?!" 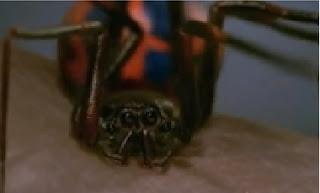 Posted by kevinandbarbie at 6:31 PM

Haha. First of all gross. Secondly, that would be pretty cool if you were responsible for creating a super hero.