Barbie and I just returned from a wonderful week in Alaska. I have wanted to visit my brother David and his wife Joel’lene since they moved there 19 years ago. Recently a physician from Alaska passed away from amyloidosis. We had corresponded via the blog and email for some time. In memory of Dr Neubauer, I was asked to present Grand Rounds for the department of medicine at Providence Hospital in Anchorage. I spoke on the topic of the doctor as a patient; a topic about which Dr Neubauer both wrote and spoke.
I would describe our week as a journey of both joy and discovery in which both can be applied to experiencing the beauties of Alaska and reconnecting with my brother, David. Of all my eight siblings, I am most like David who is two years my senior and two inches taller. I have always looked up to him. Of the eighteen most important decisions that I have ever made that have shaped the course of my life, David, and my oldest brother Harold, were involved with the first six. As the 4th child and 3rd son I was the great beneficiary of their experience. They forged the trail ahead that allowed me to take a more direct, pain-free path. They were my buffers. They got me all of my jobs from age twelve through college; advised me on which classes or teachers to take. We even dated sisters at the same time. (That never really worked out.) I owe my early successes in life to my brothers. But then, at age sixteen, David went off to college and we were never really together since that time. Between college, overlapping missionary service, and job moves, we haven’t seen much of each other over the last 37 years. 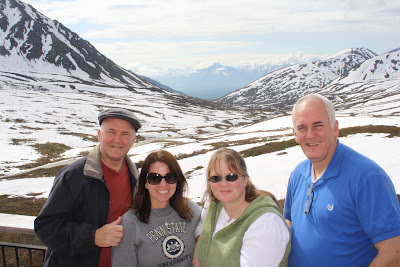 As David and Joel’lene gave us the grand tour of south central Alaska I could sense how who you marry and where you live truly can shape who you become. They love it there, now I understand why. And yet, after 37 years, you can’t shake genetics and early childhood influences. Barbie also discovered how similar David and I are in our sense of humor and the sub-conscious tendency to correct factual deviations on diverse topics. Despite our common upbringing, I learned that we have very different memories of our early childhood. I have always felt, and still do, that I was blessed with wonderful parents. However, my father did have a temper. What very young children most crave in life is consistency and predictability. It is easier to understand now the pressures and stress that my parents had in raising nine children, but not when you are six. And yet, why are my memories different? I believe that painful memories are punctuated and easier to retain while many of our happy memories relate to the mundane activities of play and exploring. It may be that we choose which memories we will use to build the story of our childhood based on the value systems that we formed and locked in by age ten. In any painful encounter we subconsciously or consciously decide to avoid that behavior in our own future or to adopt it. This is also true for the positive and constructive lessons that our parents teach us. I decided very early that I wanted to trust my children to make their own decisions the way my parents trusted me. I valued my parents’ trust and the freedom that it gave me.
Yet I also must admit the fact that all parents make mistakes. Parenting is on the job training and the steep learning curve is more evident to the oldest children. I know that my older siblings suffered more than I did. By the 4th child parents have learned a few things, and as the 4th child it is easier to hide from both a parent’s anger and my responsibilities. I became very adept at avoiding both work and pain; something that my older siblings are happy to remind me.
David shared a memory that is still difficult for both of us. At age 9 I asked for a trumpet to play in the school band. After certain coaxing, my parents relented and rented to own a trumpet. What I did not know until years later was that David, two years earlier, had made the same request and was denied. He felt that this was unfair; and it was. I have always felt guilt since I learned this. However, a child of nine cannot comprehend the complexities of context and timing in adult decisions. To the adult it is a simple pragmatic decision. To a small child, a seemingly small decision is huge and can greatly impact their developing value systems. This scared me as a parent wondering how many absent-minded decisions that I might have made in the moment that had life-long impact on my kids. Yet as a whole, I have many more happy memories of my childhood than painful ones. I have always seen myself as blessed, never as a victim; because not a day has gone by since my memory began that I have not felt loved.
It was so wonderful to reconnect with the brother that I looked up to and still do. He is a really good man. The last day we were there he was constantly watching the water on the lake, waiting for a good wind so that we could jump onto the small catamaran he has and serenely sail across the lake. It just felt good to hang out with him again; no cares in the world except for naming the birds that we saw. It was peace; it was joy.
As we flew home another memory presented itself. There was a moment when our band of brothers was briefly reunited in the same city during my last year of college. David had an art class that required him to create an original work in mixed media. David cut a 2 x 8 foot piece of wood, coated it with a white sticky coat of enamel and leaned it against a fence. Harold, David and I then took turns throwing clumps of dirt and snow, sticks, trigs and tiny pine cones at the upright board. We even drove his car over it to leave tire tracks. In the end we reveled in our collective creation as we thumbed our noses at the ‘art’ in the work that stood before us. We laughed and had such a good time and bemused ourselves as to how it would be received by his professor. A few days later we were all shocked to hear that David had scored an “A” on his installation.
Childhood can be very messy. Too often adults expect us to think like them. They have forgotten that before the age of ten we have yet to fix our sense of shame and inhibition, while this is important to function in adult society, it also ultimately dampens our creativity. The world of the child remains wondrous and our adventures endless. We look up in confusion at cynicism and despair. However, we also sense, at times, great beauty and safety in the love we feel.
Maybe David’s professor saw something that we did not; something lost, again found. Reflected in the mess of mixed messages that stuck to the board of our forgotten youth was a moment of our innocent past as we had played together so many years before. We have since cherished that moment. From the mud and dirt, sticks and stones of our childhood we ultimately create a life of lasting beauty; of course, art, like beauty, is in the eye of the beholder. 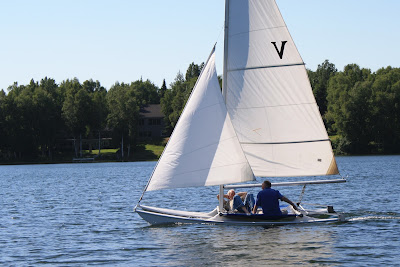 Posted by kevinandbarbie at 7:44 PM

I just got all caught up on your blog. This made me really bummed that I missed out on hanging out with you and Barbie at the Pentagon! Thank you for this post, it made me contemplate my relationships as a mother, sister, and daughter in a good way. We are so happy for all your happiness, with Barbie finishing school and Caitlin engaged. And you you are always in our prayers. Hope to someday be able to go sit for hours with you and Barbie at OZ again and chit chat about life!