It's all about Barbie 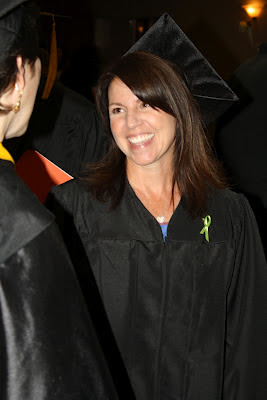 Can I just say, "I am so proud of Barbie." Most people don't realize how hard she worked over the past three years to accomplish her goal of becoming a dental hygienist. I do. Nobody in the history of thinking spent more effort to learn such things as she thought were foreign to her nature. Barbie's gifts lie in the area of music, not the metric system. However, she was determined not only to pass her classes, but to do well; and she did. I have always felt that nothing make you feel more alive than taking risks. She dove into the unknown in the fall of 2008 as she struggled with the decision to begin a new career path as a dental hygienist.
Now, at this end, her success brings her new confidence. Clearly, her fellow students recognized her tenacity in choosing her as the class graduation speaker.
In her own words: 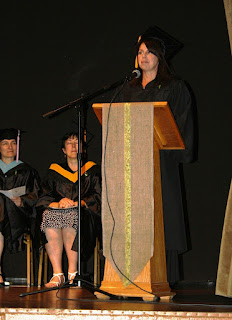 If asked 16 months ago what a dental hygienist did, we might have said something like, “They clean teeth, take x-rays, and sometimes give anesthesia.” Now if asked that question, we take a big breath and say, “How much time do you have?” Looking back at that first day we arrived for orientation, we left with a suitcase full of books, an armful of instruments and a laundry list of odds & ends you would never find in a scavenger hunt. As we hauled them to our cars we may have had the thought, “What have we gotten ourselves into?”  Little did we know that the months ahead would require a huge amount of sacrifice: lack of sleep, lack of family time, lack of entertainment and lack of everything fun. Our dental hygiene school became our new home and at times we felt as though we never left. We stopped exercising regularly, stopped eating well, and frankly worried that our friends would abandon us since we had no time for them.

Sacrifice is the act of giving up something valued for the sake of something else regarded as more important. Surviving and graduating from this program became our utmost valued and important act.

Almost 4 years ago my husband was diagnosed with a disease that had damaged his heart. At the time, I was working in a dental office as a dental assistant. I had wanted to go to dental hygiene school at some point but never found the opportunity.  With his diagnosis we both needed to quit our jobs. I became a full-time caregiver and he became a full time patient. He received a heart transplant, bone marrow transplant and many chemotherapy treatments as well as illness that come with a low white blood cell count. His life expectancy was less than desirable such that he usually wouldn’t buy green bananas.  It became clear that I might spend a significant portion of my life without him. He strongly encouraged me to follow through on my desire to become a dental hygienist as that would ultimately give me both purpose and security in whatever future we found ourselves. Initially I feared that such an effort would require me to sacrifice what I valued most; time with him while we still had it. Yet, the answer was clear and I immediately enrolled in school to begin my pre-requisites.

School took time away from my husband. I could no longer accompany him to doctor appointments, care for him when he was sick or overall just spend time with him. And I worried that the time I spent away from him could take away from the time I might have left with him. As he fought to stay alive, I fought to graduate. Now I might not be able to give him a heart transplant but I can sure clean his teeth!

C. S. Lewis once said, “No great wisdom can be reached without sacrifice.”

In these last 16 months, we have grown abundantly to become who we are now. What was a suitcase full of books became a brain full of knowledge. An armful of unfamiliar instruments became necessary tools. And those laundry lists of odds and ends were the finishing touches. And with all of that, we have proven to ourselves, our instructors, our friends and our family that the sacrifice was worth it. As Joe would say, “You can do it.” And we did. Congratulations class of 2012!
Thank you.

She has secured a future of service to others as her new skills will be used to help patients and allow for financial independence. But for me, I also am happy that she is done because I get her back. Now it's time to begin making new memories together in earnest. In this month alone we went to Atlanta, Pennsylvania, Connecticut and the Pentagon and this Sunday we fly to Alaska.
This is just the beginning. 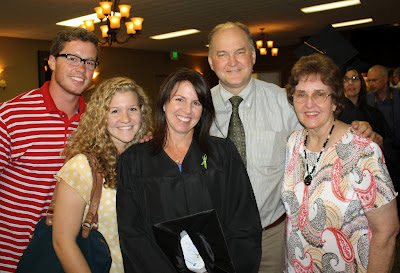 Kevin
Posted by kevinandbarbie at 2:44 PM

That is one fantastic speech.

I'm sorry I missed Barbie's presentation, it was clearly a powerful speech! I am so proud of Barbie's determination, vision and perseverance; she is a great example of what's possible. That's "one tough babe" you've got as an eternal companion, lucky Kevin.