Each of us surviving amyloidosis, in ourselves or a loved one, can help the rest of us in often profound ways. Muriel Finkel is the maven of information. She supplies us with incredible articles and access to information that define the cutting edge progress in this disease. I say thank you to her with all of my heart. Her most recent update includes the current report by the team at the Mayo Clinic on 10 year survival data on 74 patients that underwent an autologous SCT from 1996 to 2001. The results showed that 43% of patients lived beyond 10 years. Some might scoff at that number and say, "Only 43%, that's dismal." Of course, context is everything.
Glass half empty, eh? (Actually, the glass is always full; the sum of the liquid and gas equals one.)
Ten year survival is a wonderful thing and more common than I previously thought. The article then goes on to talk about significant baseline characteristics that might predict a better prognosis. There were four, but one stood out, the number of organs involved, although heart septal wall thickness also contributed. Post therapy lowest light chain level and degree of response also correlated. I, of course, inserted my numbers, both baseline and post SCT and I clearly will not be in the long term survivor (LTS) group. Yet, for me the glass is still full. I have had a heart transplant, so it is apples to lacrosse sticks. As such, I have designated myself the current president of my own long term survivor club. With continuous chemotherapy I have only succeeded in pushing my light chains to the median level for the non-LTS group.
What was most interesting to me was what I learned from the introduction to the article. Sufficient to entice me to attempt to translate it into common American English.

I refer to the article below and reference it so that I may quote verbatim the first paragraph.


"INTRODUCTION
Systemic immunoglobulin light chain amyloidosis (AL) is a plasma cell dyscrasia in which monoclonal light chain protein aggregates and deposits in tissue as amyloid fibrils.1-3 Only a relatively small percentage of Ig light chains are amyloidogenic,as evidenced by the finding that AL amyloidosis occurs in only approximately 6% to 15% of patients with multiple myeloma. Amyloidogenicity is related to structural features such as the light chain isotype and the variable subgroup. The folding pathway of such amyloidogenic light chains is believed to pass through partially folded metastable conformations that aggregate either 1) at sufficiently high concentrations or 2) under specific environmental conditions."


Most of us know that AL or light chain amyloidosis is caused by the deposition of large quantities of abnormal proteins (light chains) that somehow band together in bundles and damage tissue. There are some pearls in the paragraph above of which I was previously unaware.


1. " Only a relatively small percentage of Ig light chains are amyloidogenic."

It appears that a mere excess of light chains is not enough to cause the condition of amyloidosis. The evidence is in the following statement that only 6%-15% of patients with multiple myeloma show a clinical presentation of amyloidosis. The rest of the patients with multiple myeloma make massive quantities of light chains, but not the toxic type.
When a plasma cell goes rogue as either a cancer (Multiple Myeloma; the plasma cell clones don't die) or a dyscrasia (AL Amyloidosis; the cells die, but make toxic proteins before they do.), they make excess copies of a single protein. Somehow, this particular protein misfolds and combines with other proteins to create a fibril. This is a random event.

2. "Amyloidogenicity is related to structural features such as the light chain isotype and the variable subgroup."


Antibodies are incomprehensible in their awesomeness. 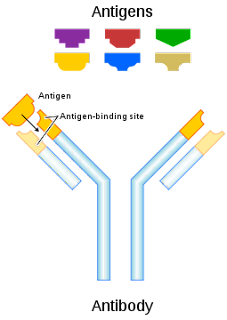 The light chain is the short, lighter blue and orange protein shown on the outside of the bigger and heavier chain of amino-acids that make up this particular protein or immunoglobulin. The magic occurs in the orange part or variable subgroup. From the time we are born we have white cells that make and store millions of unique antibodies that differ in the orange tip region. A controlled fire of mutations allows for this library of antibodies, most of which may never be used. Usually, mutation is bad, however, here it is necessary for our survival. When we get an infection or any foreign protein (antigen) enters our bodies, millions of white cells, (B-lymphocytes) each presenting their own unique antibody go up and 'taste' the invader. Most don't recognize it and move on. However, one will have a unique shape that will allow it to stick, like a lock and key. An alarm goes off and the B-Cell becomes a plasma cell and dedicates it's life and the life of all of it's daughter clone cells to making that single unique antibody with it's unique light chain.
I am no expert, but it might be additional factors that cause the overproduction and misfolding of our unique light that make ours toxic and others not. This part I don't understand well. In other words, just misfolding and making fibrils out of any light chain won't cause amyloidosis. It may be a specific clone that is required. I would imagine that if you did amino-acid sequencing to get a fingerprint of each of the variable region our light chains for those of us that have this disease, they would all be unique. The commonality of the presentation is more likely related to characteristics shared by the final products; first, their preferred soil. Some fibrils have shapes, bonds and electrical polarities that favor heart muscle, while others prefer to clog up kidney tubules. Kappa light chains are monomers or single molecules, while Lambda are dimers, or double molecules. This means that they start out twice as big and this might effect there propensity for kidney damage. Regardless of the initial clonal type, the final common pathway is tissue damage.


3. "The folding pathway of such amyloidogenic light chains is believed to pass through partially folded metastable conformations that aggregate either 1) at sufficiently high concentrations or 2) under specific environmental conditions."


Here the authors teach us that it is not just the high levels of our light chains floating around, but the environment around them. Tissue types, other proteins, cellular communications: many things may impact the toxicity, independent of our light chain levels. We all know that each of us have a different range where our light chains levels live, both on and off therapy. Yet, we cannot compare numbers like PSA for prostate cancer; because we cannot compare our respective environments. We do all agree that lower is better, though.


4. The second paragraph in the introduction has a line that states, "One of the rationales for the efficacy of such treatment is the remarkable observation that it is the growth of fibrils, in contrast to existing fibril load, that inflict cellular damage through transient defects in the cell membrane."


This was a new concept for me. Essentially, I interpreted this as these nasty protein fibrils do there damage as they break through the window, not while they vegetate inside the cell as couch potatoes. Therefore, the target of treatment is to prevent new break-ins rather than remove the loafers already living there. The blood tests that measures our light chains only detect the hooligans on the prowl, not the ones already in residence. That is measured by organ health, and it's ability to heal itself once the break-ins are curtailed.
We have SCT and chemotherapy the reduce our plasma cell numbers and prevent them from making more light chains of one particular flavor.

I hope that this explanation is clear enough to add to your understanding of this article and our shared lot in life.

May you all join my LTS club.

If I have erred, please correct me so that we may all learn.


Posted by kevinandbarbie at 12:53 AM

Kevin, thank you so much for this explanation. It has always been so hard for me to understand amyloidosis. We lost my dad to it 3 years ago. I am cheering you on from Chicago and so glad whenever you update--all the best to you and your family!

This is a very nice blog and thank you for the thorough explanation on the disease. I am also a blogger for an amyloidosis blog: http://amyloidosissupportnetwork.org/powered by bensfriends.org. I feel great to meet more and more people everyday who also blog for amyloidosis.

Nice hopping by your site,