Recently, Barbie, Jeremy, Caitlin and I successfully navigated the world’s largest corn maze in Dixon California. Little did I know that was only a pre-amble to an excursion into the maison du mazes of France; Versailles and the Louvre. I am all for saving a buck, (or a Euro which is 1.4 x harder). So we bought the two day Museum Passes. That means that you can see all of the museums you want for one prix fixe as long as you pack it in to two days. We chose Wednesday and Thursday because some museums are open until 9:30 PM, thus allowing oneself to meander until you are completely exhausted, while your brain and feet absorb the sum total of all French history and culture.

As we made our daily 45 minute train ride into Paris from Bailly-Romainvilliers, we saw the sun not only, break through the clouds, but a clear azure sky. We changed plans and decided to head to Versailles. This was the palace of French royalty until the French revolution which culminated in the removal of the heads of state. We first toured the palace which is larger and more opulent than any prior edifice I have seen. Satiated with golden gildings, we retired ourselves to the gardens. And I mean square miles of gardens. Immediately Barbie and I got lost since I took a diagonal right at the second fountain instead of the fifth fountain. We have been travelling with my brother, Harold, and my sister in law, Darlene. They decided to take the tram instead and meet us at Marie Antoinette’s estate house. Unfortunately, we didn’t clarify which house. The large mansion, the little mansion or the farm house village she built to recreate her childhood. It was a long walk for us once we got on the right path and never met up until hours later we finally found each other back at the palace.


Nevertheless, our visit to the Marie Antoinette’s village was quite picturesque and was accentuated by the beauty of the sunshine and clear weather. 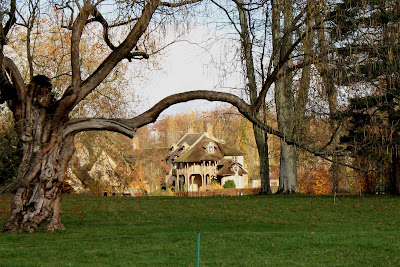 Back together again, I expected Harold, Darlene and Barbie to want to ‘call it a day’ and head back to the resort. However, they agreed to go do the Louvre instead. While Versailles boasts miles of outdoor gravel paths, the Louvre offers miles of indoor marbled corridors instead. It remains one of the most celebrated museums in Europe, and with good reason. It has become a receptacle and guardian of some of the most important art pieces and artifacts in human history. We tried to see what small fraction of its contents we could before we were totally exhausted; the Mona Lisa, the winged victory, Napoleon apartments, French renaissance etc………


﻿ ﻿
Finally, it was back to the ‘A’ train for the journey home. Time to rest up for the second day of the museum marathon; Rodin, Napoleon’s Tomb, Army Museum, Saint Chapelle and finally, the Musee de O’rsee.

Kevin
Posted by kevinandbarbie at 1:59 PM

Awesome! And I mean that in the least vapid way! Truly awesome!