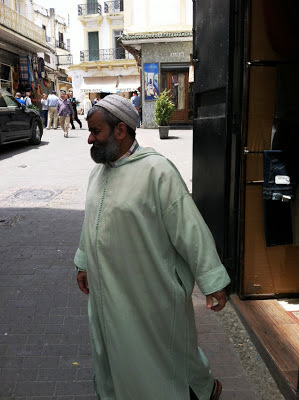 Recently, Barbie and some of the family and I travelled to Southern Spain to the Costa del Sol in Andalucia. I was stunned at the beauty of the mountainous terrain as it descended into the beautiful Mediterranean Sea. The waters of 'Middle Earth' are met with numerous small towns; each with their own unique charm, Estepona, San Pedro de la Alcantara and the hermosisimo, Marbella. We thoroughly enjoyed our daily excursions as we met people who were welcoming and kind to us. I love the Spanish accent. It sounded so clear in my Argentine ears.
I had a goal to claim Africa as a continent that I had set foot in. We were close enough to see the mountains of Morocco in Northern Africa while sitting on the couch in our villa at the Marriott. To get to Morocco was actually quite simple. We drove 45 minutes to Tarifa, a small town just past the Rock of Gibraltar. Tarifa forms the corner between the Atlantic and the Mediterranean. A fast ferry then carried us to Tangiers for the day.
Our tour guide met us at the dock (If you go to Tangiers on FRS, get the tour. It's cheaper and a much better way to see the city than walking.) He introduced himself as Bashir in English that was quite understandable. He seemed quite laid-back and unaffected. I liked him. He could so easily engage in such casual banter that I could envision visiting with him over a ceviche tostada sitting on the sea wall of the Pacific Beach boardwalk in San Diego.
He described the city as we drove in and around it. Eventually he took us to the open market in Medina and finally to the Casba for lunch. While walking he made reference to the Moroccan flag with its five-pointed star, each point representing the five pillars of Islam. As he later described the minarets and the call to prayer five times a day, I asked if the frequency was also connected to the five pillars. He did not know if they were correlated. 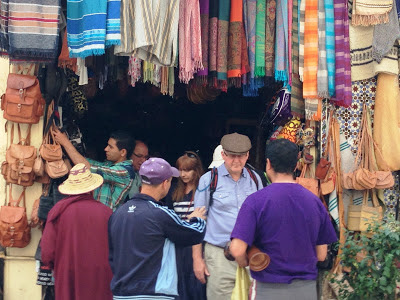 After lunch, we were requisitely funneled through the shops of hard-sell vendors of rugs and spices. (These likely subsidised the lower cost of our ferry tariffs.) Finally, we were back on the streets of the Casba, mercilessly hounded by street vendors that would follow me for blocks. 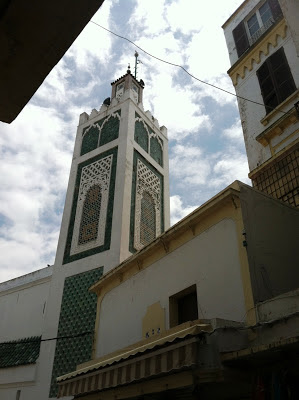 Trying to escape, I walked down to a mosque decorated with geometric green and white tiles. Somehow I instinctively knew not to enter. I stood at the door gazing in. In a moment Bashir was next to me. As I turned toward him, his face got very close to mine and with all seriousness he said, "you seem to be a very wise man." I didn't know what to say. Then he continued, "do you want to go to hell or to heaven?" I answered, "To heaven, of course." He then proceeded to urgently invite me to study Islam. He reasoned that he could not stand before Allah at judgment day and admit that he did not share the truth with me when he had the chance. It was deja vu. This was a rationale that I had also used when teaching Christ's Gospel in Argentina. We then engaged in an absolutely lovely discussion about our beliefs in one God. He said that Muhammad's message was not just for Islam, but for the entire world. He said that Jesus was also a prophet. I said that, for, me Jesus is the Son of God and that his teachings were for all people as well.
Was I offended at his invitation? Not at all. I was honored that he saw in me someone who could listen openly to something that he cherished. I was struck that our differences paled in comparison to what we held in common. We both have the same goals. Live honorably by studying what we are taught in our scriptures that we may return to a loving God.
I thanked him as he left us at the dock to again return to Spain; to Europe. As I sat on the ferry I reflected on the courage he had to share with me his faith. And then I thought, when you value something so much, why would you not share it?
I learned much from Bashir that day.

Kevin
Posted by kevinandbarbie at 11:46 PM

It all sounds lovely and thought provoking. I admire Bashir's bold desire to share what he understands as truth. I find myself waiting till the conversation turns in a "gospel discussion" direction before I share my beliefs. Thanks for sharing; I'm
inspired to be a bit more like Bashir.

What a blessing for you and Bashir to find tolerance and understanding through the discovery of shared beliefs. If more people did this, peace would become inevitable!

What an awesome story. I am very blessed to hear of your faith inspiring adventure with Bashir.