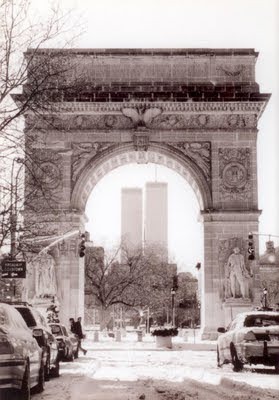 It was Monday evening and Rebecca and I were sitting at the kitchen table. I glanced over at the calendar and then commented to her, “Hey, Rebecca, did you know that tomorrow is international emergency day?” Knowing of my propensity for puns and wry observations she glanced up with the expectation that I finish so she could get back to her homework.  “Tomorrow is 9-1-1,” I said. All I got was silence and a slight smile.
About the same time Barbie called her voice teacher to let him know that she wasn’t feeling well and needed to cancel her voice lesson for the next day. That meant she would not need to travel to 12th Avenue on the lower west side of Manhattan in the morning.


I finished my first case and a nurse came in and said a plane had hit the world trade center. At first someone said it was a small plane and it was an accident. I went into the OR lounge to see the image of the tower with smoke. Talking heads droned on the television behind the image. Suddenly, a dark image circled around and headed toward the towers. In the seconds prior I thought, is this an observation plane? Then it hit and we all witnessed the explosion. The talking heads stopped. The mumbled to themselves, as they were no longer reporters, rather numbed observers as ourselves, “Is that live feed?” In that instant we all knew. We were under attack.
We sat there in shock wondering what it all meant. I went back to do my next case in the OR and reports came in. “The pentagon has been hit!” I said to the resident there. “This changes everything; things will never be the same.”
Soon the news came, “One of the towers has fallen.” By now we were all in the lounge unable to look away, only one tower remained. And just when I thought it couldn’t get any worse, we watched it fall. This was not a movie, this was not a historical documentary, this was happening in real time 75 miles from where we stood.
The rest of the OR schedule was canceled as we went on alert in case victims of the attack needed medical care. We waited all day; none came. It was as if the world had stopped.


The elementary school didn’t say anything to the children and left it to us parents to explain the day’s events. There was no perspective to put this in. It was just horrible. Eventually the TV became an endless stream of images and words. The words became meaningless as the power of the images, repeated over and over, overpowered us. We could no longer watch; we had to look away.
The next few days were a struggle for everyone. Who was to blame? Who was to pay? How would this new world affect our lives?


The following weekend was Stake Conference. As the stake presidency, our speaking schedule was light as we would have a visiting general authority who would take the bulk of the time. I personally didn’t have a speaking assignment.  Friday night President Fluckiger called me to inform me that the visiting authority was grounded in Canada as all flights to the United States had been suspended since Tuesday. We were on our own and I would need to prepare a talk for Saturday night and Sunday morning.
The next morning the cub scouts were taking a hike up Sleeping Giant, a large hill in our town of Hamden, Connecticut. As we walked, the primary president, Mariann Pillar asked me what I was going to speak about. “I don’t know.” I responded. I looked up at the cliffs above us thinking of the precipice upon which we were all now teetering.  Suddenly, an image from the Book of Mormon came to my mind. It was the prophet Alma standing with his disciple Amulek watching in terror as the enemies of the believers were torturing and killing hundreds of innocent people and burning them alive. Amulek pleaded with Alma to call upon the powers of heaven to stop this atrocity.
Alma responded, “But Alma said unto him: The Spirit constraineth me that I must not stretch forth mine hand; for behold the Lord receiveth them up unto himself, in aglory; and he doth suffer that they may do this thing, or that the people may do this thing unto them, according to the hardness of their hearts, that the bjudgmentswhich he shall exercise upon them in his wrath may be just; and the cblood of the dinnocent shall stand as a witness against them, yea, and cry mightily against them at the last day.
This became the essence of my talk. I then spoke of the persecutions that we as Latter Day Saints had suffered during our early history, being driven from state to state, our lives and property destroyed. And yet, we were able to rise above hatred and despair to forgive and move on. It was not for us to judge the Muslim people because of evil men among them. To succumb to hatred and fear was to grant the terrorists success.
I ended my talk and heard the collective, “Amen.” And felt drained. I said what I had to say and now it was time to heal.
It is now ten years later and I wonder if we have learned anything. I cannot say as a society that we have yet risen above this, but I do know that the individual human spirit remains undaunted. The reversal of evil is accomplished through the daily kindness of compassionate acts. That is how we heal. It is altogether fitting to remember the lives lost on that day and remain resolved that hope will subdue all fear.
Kevin
Posted by kevinandbarbie at 5:26 PM

Thank you Kevin for your thoughtful post. We were just reading in Alma about the experience that Alma and Amulek had to endure and how they were called upon to practice faith in that very difficult moment. The story came alive to us as we read it and it is a fitting companion to today.
Since Caroline was three years old and sound asleep on the morning of Sept 11 when we watched in horror the scenes of devastation, we decided to wake her this morning as we together watched the replay of that morning.

We hugged her and thought of the loss of innocent lives praying that they are able to comfort their loved ones in some way and that God's love finds a way to their hearts.

Love to you and Barbie. I got to hug Caitlin the other day and enjoy an ice cream with her. She was doing so well.

Thank you for sharing this. :)