A day with Caitlin 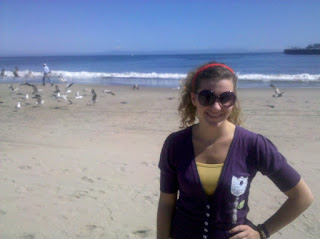 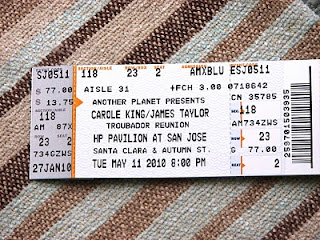 When I was sixteen I purchased the album, "James Taylor's Greatest Hits. It was the first record I had ever bought. He was the one artist with whom I could sing along because he is a true baritone. I have always wanted to see him in concert. When I saw that he and Carole King were performing together, I had to go. I bought the tickets on the spot. What I did not realize was the fact that Barbie would have her chemistry final on the same day. In addition, I later found out that it would also be the day of my four-month heart biopsy. I decided to take Caitlin as my date.
Tuesday morning at 4:00 A.M. Caitlin and I drove to Santa Clara to arrive in time for my 7:30 heart biopsy, 9:00 AM clinic visit and 10:00 AM chest x-ray. The heart transplant support group was from 12:00 - 1:30 PM and then I had a psycho-cognitive evaluation by Dr Epstein as part of a study he is doing on whether transplant patients remember to take their medications.
It was then time to go to the beach. Thirty minutes later we were in Santa Cruz on the Boardwalk. We loaded up on cotton candy and rode the Giant Dipper, an 85 year old wooden roller coaster. It certainly creaked like an 85 year old cripple. We dined at the Cheesecake Factory and then went to the concert. I was one of the youngest people in the audience. We watched as people rolled in in with wheelchairs and with canes and walkers. We knew we would be 'rockin out' (assuming you had brought your own rocking chair) No warm-up band; they started just after 8:00 PM. Given the combined library of these two prolific icons, we were carried away with one hit after another. James Taylor was fantastic, but Carole King stole the show. Her powerful voice filled the stadium with "I Feel the Earth Move Under my Feet". But the place went crazy, especially the women, with her anthem, "You Make Me Feel Like a Natural Woman". I was transported back to my high school and college days. Carole King looked like she was in her fifties, but then she mentioned that she had her first hit in 1956. The years have been good to her.
Soon we were back on the road for the 2 1/2 hour drive home, Caitlin slept (so did I), but we made it safely home.
The heart biopsy result was NER (No Evidence of Rejection!) That is always good news.
Caitlin and I had a wonderful day together making father/daughter memories. She really is a sweetheart to spend so much time with her over-nostalgic dad.

Awesome! I would love to go to that concert! I know they are coming here...this month I think!

Heart surgery in the morning.. check
Roller coaster in the afternoon.. check
Rock concert in the evening.. check
Hang out with daughter all day.. check

My mom just gave me a James Taylor's greatest hits cd yesterday. I'll be happy to listen and sing along this afternoon.
I'm sooo excited about the wedding today and I can't wait to see pics. Rebecca mentioned something about Caitlin taking an awesome trip this summer. I'll have to call you guys tomorrow to hear the details of what's going on with both girls. :)
YAY for NER!