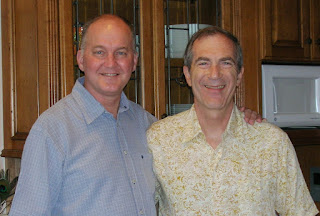 Dr. Clayman
Last weekend we travelled to Irvine, California to attend a fund-raiser and surprise party for Ralph V. Clayman, M.D., the dean of the medical school at University of California, Irvine and my mentor. I had the privilege of being a fellow with Dr. Clayman at Washington University in St. Louis from 1992 to 1993. That experience changed my life. Ralph is the most extraordinary person I have ever known. What he has accomplished goes beyond what most celebrities or politicians can ever hope to achieve. He has the unique capacity to inspire in others greatness beyond their natural capacity. Before I met him, I did not know how to write. For him, if it can be dreamed, it can become reality. But he doesn't do it alone. Among his accomplishments, he was the first surgeon to remove a solid organ; a kidney, laparoscopically. That would be like using chopsticks to cut a T-Bone steak and remove it through a keyhole. However, unlike most brilliant inventors, he included and credited as many people as possible, such that he taught 100's of doctors who then went worldwide to teach thousands of other doctors that could then save and improve the lives of millions.
And yet, when you meet him, you feel like you are the most important person in that moment. Barbie and I were invited by his wife Carol to a brunch at their home in Irvine. We haven't seen them in eight years and, as we visited, my memory was flooded with the past experiences and morsels of wisdom that he had given to me. Without my year with Ralph, I would never have been hired at Yale. It was a difficult year. I felt like I was running in front of a locomotive and feared that tripping would find me run over. However, when I finished, no one was more supportive of my career than Dr. Clayman.
I have met men that, when I ask them if they have ever had a mentor, they respond, "No." I find this very sad. For these individuals can never become more than that of which they are personally capable. A mentor can see talents in you that you did not know even existed. You can't hire a mentor; but if your personal pride blinds you to their presence in your life, then you are lost to mediocrity. Just pray that divine providence will place them in your path and, when you meet them, stop and listen.

Kevin
Posted by kevinandbarbie at 9:54 AM

i'm so glad you got to go down for that! yay for happy times!

You are lookin' good, Kevin - tho I know it's just a front! You are right about mentors - they not only teach valuable lessons, but also bring out the best in us. Bless each opportunity we have to share & receive these glimmerings of God's awesome love!